Improvements for the DALI module VMBDALI

Many settings screens have received improvements to make them more user friendly:

In this version scaling issues in the different clients were resolved!
If you made special modifications to a zone to tweak the scaling on a iPad or Android, you may need to correct the location of the buttons!

This intermediate version holds some smaller improvements. We publish this version before releasing the next major new features we have been working on the last few months

For our Velbus installers and enthusiasts: an important bugfix was made in VelbusLink 10.4.0.

In the previous versions there was a bug that blocked the communication when connecting to the bus via Home center.

This brand new version brings some new features and some improvements!

Visualization via the logging will be added in a future version.

A total new range of music players supported! Music devices based on the Frontier Silicon chipset can now be operated from within Home center the same way Sonos is operated. This means you can stop / start the player, navigate through the current playlist, set volume, control the mute and integrate them in your Home automation system via the logic, so you can operate them through the buttons in your house and add them for example to the all off operation.

You can now rename and remove unwanted music devices via the settings in the web interface.

Now also the 2N access units are supported. The available buttons are available as toggles and inputs to operate or to use in the logic interface. They are detected automatically at startup and user name and password can be managed in the settings in the web interface.

This update mainly contains some improvements and bugfixes.

New in this update

Home center in the spotlights at Batibouw 2015 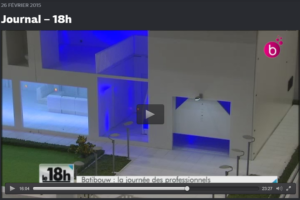